At first you have to register here: https://forms.gle/ULz5zABJm47Tnhst9, because the can let only 60 people in. I think they will answer, when you send your email. Unfortunaletly this time they made it only in Hungarian. If you do not understans something, let me know.

Afrer registration here you can by tickets. 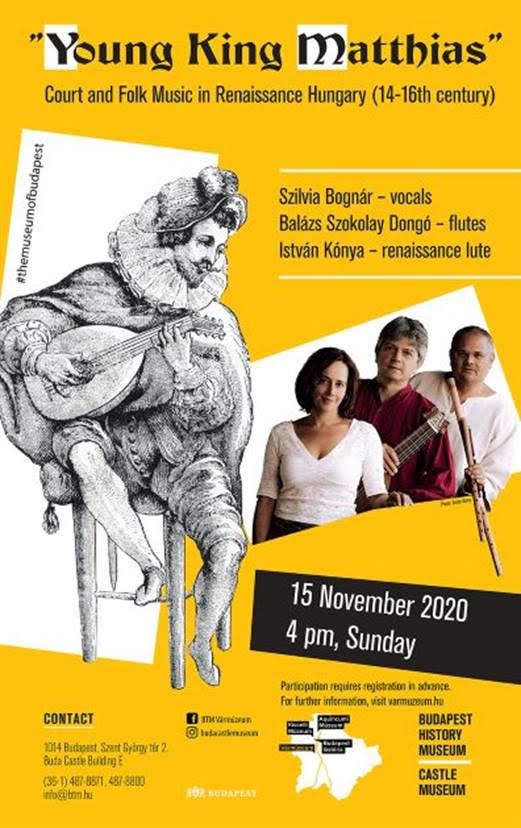 One can only marvel at the huge number of melodies and texts from past centuries that have been preserved by folk tradition. 20th-century folk music collections abound with songs already known from earlier written sources, 16-17th-century songbook manuscripts. The number of 16th-century and later texts recovered has also increased recently. These songs demonstrate the richness of Hungarian musical tradition, at the same they drawing our attention to the relationship between certain musical trends and genres. Our selection includes: historical song, religious folk song, archaic folk prayer, psalm translation; poems of Bálint Balassi, love- or flower-song, entertaining and wedding song and folk ballad. – The tradition of singing, accompanied by a plucked instrument, goes back to ancient times. In Middle Europe the accompaniment for the songs was not written down or set, it was performed as improvisation. Its main function is to support the meaning of the text and to reflect its atmosphere. The other importent instrument from the middle age was the „flute”, which had many types, using in folk and composed music. – You can hear in the program religious music from hungarian codexes of the 15th-century, works by foreign composers who served in the hugnarian courts) or were connected with hungarian kings and queens (Wolkenstein, Barbireau, Bakfark), hungarian instrumental dances written by foreign composers (Heckel, Picchi, Schmall).